"Some days you just can't get rid of a bomb!"
―Batman[src]

Batman is the crime-fighting superhero that is part of the Dynamic Duo, Terrific Trio and later the Justice League of America. His true identity is millionaire Bruce Wayne. He is aided in crime-fighting by his sidekick, Robin the Boy Wonder, and Batgirl.

Batman has trained his body and mind to peak human condition to battle the forces of evil. He and his sidekick are officially recognized as duly deputized agents of the law that bring the super criminals of Gotham City to justice. Batman uses a vast array of hi-tech gadgets, stored in his utility belt, his Batmobile, and his headquarters, the Batcave, to accomplish his goals.

Bruce was born (in series context) on February 19, 1929, to Thomas and Martha Wayne. Little is known about Bruce's early life other than that he was born to wealthy parents who were killed by unidentified criminals. It has been said that an intense rivalry between him and Britt Reid has been growing since childhood.[1]

Bruce shares his occupancy of Wayne Manor, the Wayne family mansion, located approximately 14 miles from the Gotham City limits, with three people. These three are Richard "Dick" Grayson, alias Robin, "the Boy Wonder," as whose legal guardian he has been appointed, Alfred, Wayne Manor's majordomo, and Aunt Harriet Cooper, who does not know that Bruce and Dick are also Batman and Robin respectively.

Bruce has made reference to his excellent education, and it is apparent when he discusses with authorities on criminal cases.

Bruce has been appointed as the legal guardian of a youthful ward by the name of Richard "Dick" Grayson, a former circus performer who had also lost his parents to the savagery of criminals. Together they started fighting crime in Gotham, using Bruce's fortune to build vehicles and equipment.

Batman's four greatest enemies formed a group they called the United Underworld, and caused the single greatest threat he and his protege had ever faced.

In his second year he encountered new super criminals and saw the return of some his greatest old enemies.

Eventually Barbara Gordon was inspired by Batman to become Batgirl. The three formed an alliance and fought crime together for many years.

Batman and Robin eventually joined the world's greatest superhero team, the Justice League of America, and did battle with the Legion of Doom. They encountered their old nemesis, the Riddler, one last time.

It is not known why Batgirl is not a part of the Justice League or if she even continues to fight crime in Gotham.

Bruce has been shown to be very intelligent, wise, and caring about others. He is also very selfless, as he is willing to give up his normal life as Bruce Wayne to become Batman, and thereby protect the innocent people of Gotham City. There is a measure of steel in his uncostumed personality, as he does not need to wear his Batcostumes to be confident or to stand up for himself.

The playboy aspect of Bruce's personality is rarely shown in the series. By contrast, in the DC Comics, Bruce Wayne has many girlfriends, but he never finishes any romantic entanglements with them.

As Batman, he has been shown to be willing to do what it takes to stop the criminals of Gotham City. Like Bruce Wayne, Batman is intelligent and wise, and has a great desire for justice. He has also admitted that even though criminals may be twisted, like the Riddler or the Joker, that he believes that with proper work they could, someday, once again become law-abiding members of society.

Other tenets of Batman's personality include these: 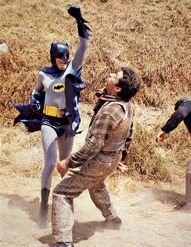 Batman is world class hand-to-hand combatant. He polished his combat for years with his sidekick Robin, the power as Dynamic Duo was feared. Batman and Robin are very adaptive to their environment, and often grab nearby objects to dispose of goons with team work. 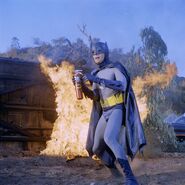 Batman with The Bomb 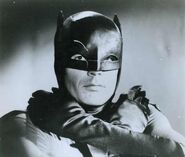