Edit
watch 01:36
We're Getting Mutants in the MCU - The Loop
Do you like this video?
Play Sound

"Question: What does no man want to have, yet no man wants to lose? Answer: A lawsuit."
―The Riddler[src]

The Riddler is an infamous Gotham City criminal and one of Batman's greatest foes. He is a masked man in a bright green spandex costume that commits various bizarre crimes and leaves riddles leading to his next crime.

Riddler's true identity is completely unknown to the Gotham City Police Department. Nearly everything about his past is shrouded in mystery, one big question mark. Although he was a high school dropout, Riddler is still highly intelligent and is able to leave riddles difficult to even the Caped Crusaders, which are often many-layered and contain several possible solutions. He now exists as a cackling, clue-dropping -arch-criminal. He delights in challenging Batman and Robin with his puzzles that he leaves at every scene of a crime.

However, he is psychologically incapable of committing any crime without offering a clue as to how he can be caught which results in his defeat.

Batman said that the Riddler once said to him; "A Riddle a day keeps the Riddler away", which means that he is never finished with his schemes until the riddles stop.

In the Batman Movie and a few episodes of Batman, Riddler appears in a bowler and a suit covered in question marks rather than a leotard costume. Likewise in the Batman Series the "Accident" shows Riddler's "?" Car!

Frank Gorshin was influential in the development of the suit and bowler hat look for the Riddler, which would later become a popular look for his comic book appearances. Likewise, when John Astin briefly took over the role for Season Two, the infamous question mark cane was introduced, which would also be incorporated into the main comic books and various other media.

11. A Riddle a day keeps the Riddler away
12. When the Rat's away, the Mice will Play

96. Ring Around the Riddler 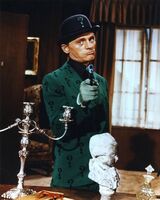 Riddler in his suit and Bowler hat 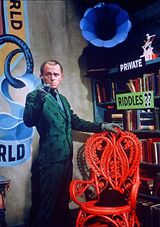 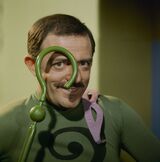 John Astin as The Riddler in Season 2 with his "?" cane 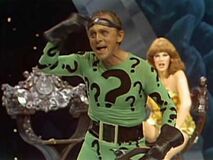 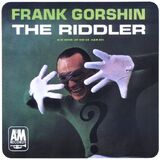